A spirit of innovation… since 2005

The “Compagnie Nationale de Navigation” (CNN), historically a ship-owner, was asked by the French Government in 2005 to maintain part of its fleet: coast guard patrol boats, frigates, etc. It won the contracts and the company began to move in a new and highly creative direction.

In 2008, CNN MCO became a group subsidiary following the merger between companies in the CNN group, MN Services Industries and MMCO. Pioneering in this segment, it offers a new maintenance concept based on its ship-owner know-how and its understanding of the day-to-day needs of a fleet owner.

In July 2017, CNN MCO became part of the ENGIE group. This new organisation allows CNN MCO and ENGIE to combine their strengths to develop specialised and recognised skills.

June 2020, CNN MCO takes a further step towards full integration into the ENGIE group by officially integrating the ENGIE Solutions brand and name. 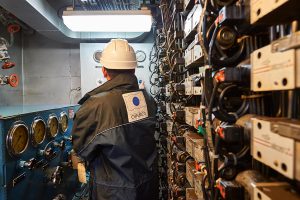