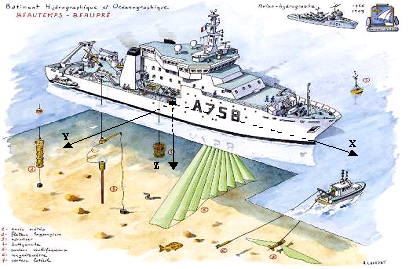 CNN MCO, carried out the operational maintenance of the Hydrographic and Oceanographic Vessel of the French Marine  called « Beautemps-Beaupré » for  3 years and is about to initiate the renovation of its data acquisition system.

The existing/current hydro-oceanographic equipments set on the « Beautemps-Beaupré » have been installed during the vessel building in 2002. The French Marine has decided to renew its fittings due to their aging and early obsolescence.

In August 2016, CNN MCO gained that contract regarding the renewal of the data acquisition system.

CNN MCO has been selected to take in charge the studies, the evolution completions, as well as the renovation of a number of equipments.

This area necessitates the setting up of various skills CNN MCO has, due to its long experience, covering studies to be made, computers programming and metal, electricity, hydraulic works management.

The studies as well as the computers programming are being made at the moment by CNN MCO and will be remitted to the customer in September 2017. Regarding the forecasted works, they will take place during the technical stop planned in November 2017.

CNN MCO will coordinate this renovation yard as well as the logistics of the relevant spare parts.

At the end of the technical stop, the vessel will be able to use its new equipments for new hydrographic and oceanographic missions.